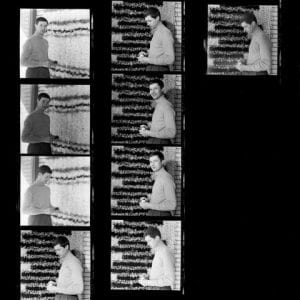 An exhibition that for the first time ever presents Hans Hosak, designer and dessinateur, with a selection of his work. It is a fascinating story which begins in the turbulent and conflictive Central Europe to finally end up in the heart of Småland, Sweden. It is a period in time which is lined with historical events, coinciding with a total remodelling of the textil industry.

The ambition of this exhibition is to throw the light upon an achievement and a pioneer who took his own course. He was born in Reichenberg, in former Czechoslovakia, and he partly grew up in Austria. Having several generations of textile heritage, Hans Hosak studied to become a dessinateur, a multiple profession within the world of textile which combines design and function.
With a bundle of energy and curiosity, it brought Hans Hosak to many different places and generated many successful cooperations and projects. During his career he came to move to Denmark, to Norway and to several cities in Sweden, before he ended up in Värnamo where he became a part of the history of Swedish textile.

This exhibition is a portait of Hans Hosak, who has devoted his life to develop the textile industry, to cultivate geometrical original forms and to preserve an abundant treasure of patterns from his origin and legacy. Here rugs mix with patterns, samples, sketches with statements and historical moments in time.